Next: Create Maps With D3 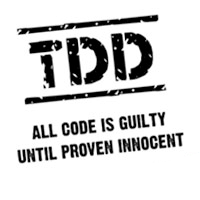 I’m a great believer in unit testing and all automated testing, really. I often see it being done incorrectly so I thought I would jot down my thoughts on this…

Unit tests should be self contained, require no setup and should be able to be run in any order. You want your unit tests to be fast so that you can run them all the time, probably every time somebody checks some code into your source control repository. Connecting to and using external resources is slow and unreliable and you want to reduce as much friction as you can in your build/deployment process.

If your unit tests are connecting to the file system, database, then you don’t have a unit test and you are doing it wrong. You have an integration test. Your unit tests should be testing the code that you have written and not somebody else’s.

I'm not saying integration tests are not a good idea, they are vital and a really good idea. I just don't think they belong with the unit tests. They should be separated out and run overnight or every hour as they will be much more prone to error.

So to test this chunk of code firstly we need to pull out the dbconnection and pass that in instead of the connection string.

Then when writing the tests we should build a mocked dbConnection that returns a specific result required for that test.

It’s not just external dependencies that should be mocked. You should really be mocking third party libraries and even your own code that doesn’t form part of your test. For example in an MVC system you might want to test just the controller and mock the model and then write specific tests for the model.

A library that I use quite a lot which allows me to easily mock my third party requires is sandboxed-module. What this allows you to do is take your require() statements and without altering your code inject a mocked version of that library in instead. So take this example

So in our test we can do this (nodeunit syntax):

There we have it: you have a unit test with mocked dependencies that doesn’t require any external assets.

When writing unit tests I think it is always a good idea to test both the success and the failure of the function. This makes sure that any functionality fails when it should do and that it does it in a reliable and consistent way that can be trapped by the calling code. It also makes you think about possible issues before they happen and code in some extra validation at the point of development rather than hastily adding extra checks after a bug has been found. Take this over-simplified example:

If you were to leave the tests as that, then yes you would have 100% code coverage and yes it does divide one number by another. However, as soon as somebody divides by 0 or passes a string in then you are probably going to get unintended results, if they haven’t been trapped in the calling code. It also shouldn’t really be the job of the calling code to do this checking, it logically belongs with the function itself to avoid checking code strewn across your codebase. So, I would probably increase the tests to add a few more tests to make sure it errors reliably and then fix the tests by refactoring the function to include the extra checking.

I hope somebody benefits from my post. Go forth and unit test.